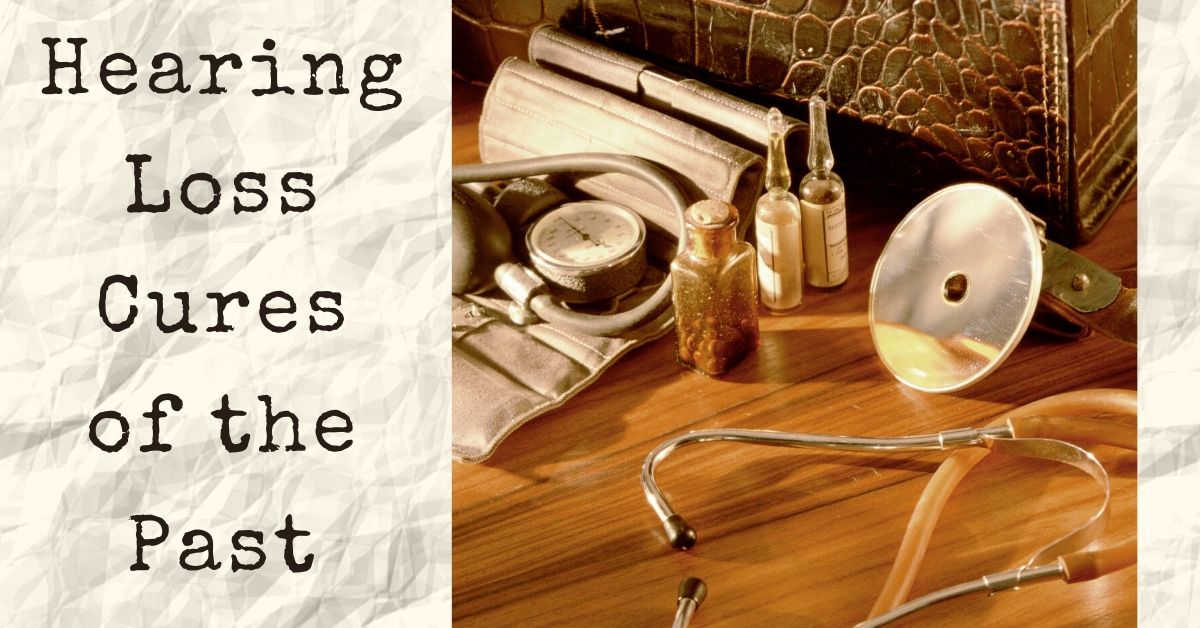 Starting as early as the 13th century, scientists explored the use of cumbersome and primitive designs to cure hearing loss. People attempted to use anything from hollowed cow or goat horns as an ear trumpet in hopes of picking up lost sound when held up to the ear. This practice continued into the 18th centuries as ear trumpets were designed to funnel sound into the ear canal. These never worked too efficiently to make a huge difference but this was all that was available for hundreds of years.

Insertion into the ear

One common theme of hearing cures of the past was the insertion of different objects and solutions into the ear. Today we know that it is rarely a wise idea to stick anything into the ear as it may end up causing more damage then the original problem.

One of the most famous celebrities of the past to suffer from hearing loss was Beethoven at the beginning of the 19th century. Beethoven was instructed by his doctors to use almond oil in his ears to cure his hearing loss. Other contemporary methods included frying peach pits in hog lard and putting this solution into the ear canal. Bear fat was another cure that was often employed. Unfortunately none of these solutions were proven to be effective. One of the most terrifying attempts at curing hearing was the insertion of a small twig in the ear canal that was to be left in at all times.  This proved to be more effective at causing pain then curing hearing loss.

In the 19th century, blistering was used as a common remedy for hearing loss. Doctors instructed patients to use caustic plaster to cause pus to form close to the ear. The excretion of pus was thought to release toxins out of the ear to help regain hearing. This however caused more problems than solutions.

Today if your eardrum is torn or perforated doctors will perform a tympanoplasty, which is the surgical operation performed for the reconstruction of the eardrum. In the past however there were attempts to create artificial eardrums that did not work. These small devices constructed often of harsh metals were perhaps early attempts at creating modern hearing aids. They were designed to help sound reach the inner ear but they were painful and ultimately damaging to the ear with no positive results.

Scientists of the past suggested climbing to the highest height and then to jump down in order to stimulate the reversal of lost hearing. Predictably this cure resulted in broken limbs and even death while doing little to cure hearing loss.

Using leeches is a practice that has been used to cure hearing loss in the past, which has still not been completely abandoned today. It is thought that the use of leeches stimulates blood flow and works as an antibacterial agent to cure infections connected to the ear. However, most doctors will not recommend this.

In the past and even today there are many oral remedies suggested to stimulate a return of lost hearing. Opium and even tobacco was suggested to cure hearing loss in the past even though today we know that these options could make your hearing worse.

Modern herbalists still call on the use of herbs to help ease symptoms of hearing loss.  Ginger, ginkgo biloba, garlic and marjoram are used to improve blood circulation and apple cider vinegar is suggested to supply zinc, magnesium, potassium and magnesium to your body. These herbal remedies should be used only after consultation with your doctor.

We have come a long way from the hearing loss solutions of the past but there is much more to come. As scientists explore we will find more and more effective solutions to treat hearing loss.