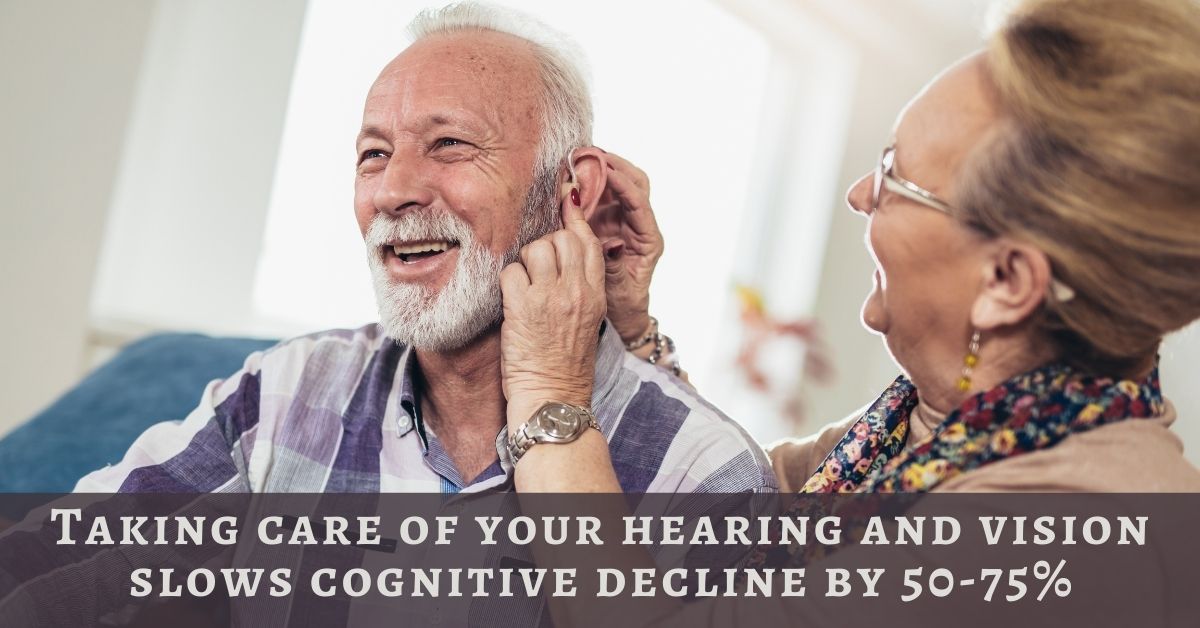 As we age many of us have to deal with declining vision and hearing. In fact, age related hearing loss affects one in three, over 65 and half of seniors 75 and older. Similarly, vision is a major issue for many of us as we age, with 12 % of Americans 65 to 74 years of age reporting vision loss having vision loss.

These issues affect how we interact with the world, but did you know that your hearing and vision are both linked to your brain health as well? If you are putting off dealing with blurry vision or issues with hearing loss, they can create more serious problems down the road, if ignored.

Recent studies now claim that dealing with your vision and hearing can delay or prevent cognitive decline by 50-75%!

What is the Risk of Cognitive Decline?

Cognitive decline is the progressive worsening of memory and confusion and one of the earliest symptoms of dementia. It is normal for memory to be affected by stress and exhaustion no matter what your age is. However, as you approach 65 years, the risk of early onset of dementia becomes a much higher risk.

While it is common for dementia to develop around 65 years of age, it is not a natural part of aging. There are things you can do to prevent cognitive decline and dementia. Dementia is not only an issue with memory loss. It can also affect the way you speak, think, feel and behave. In fact, dementia can reduce mobility, sense of independence, interfere with daily tasks, impact your memory, mood, affect your personality, and put stress on your most cherished relationships.

Visual impairment has been linked to cognitive decline. Researchers believe that maintaining healthy vision with contacts or glasses can be an important strategy in preventing cognitive decline as we age.

Similarly, hearing loss has a major impact on our mental health, and connection to the world. As this becomes compromised due to untreated hearing loss, we become at a higher risk for brain atrophy which has been found to increase the risk of cognitive decline and early onset dementia.

Hearing loss often starts with the loss of certain pitches and tones. As we struggle to hear without those sounds our brains have to work overtime to compensate for the loss in auditory information. This can lead to extreme mental and physical exhaustion. When communication becomes difficult, many choose to opt out of social situations all together, choosing to self-isolate instead. The brain, like a muscle, needs stimulation to remain sharp. As the brain becomes less stimulated due to social isolation, the brain can actually shrink or atrophy. This creates a much higher risk of developing dementia.

Using data collected from approximately 2,000 people in the US, monitored health data biannually over an 18-year period. The data was very clear, showing a much higher risk of cognitive decline due to social isolation and under stimulation commonly caused by declining vision and hearing health, due to aging.

Maintain Your Vision and Hearing for a Healthier Mind

Treating declining vision with glasses, corrective vision surgery or contacts can improve sense of independence making it more likely for people to stay active as they age. Researchers have uncovered evidence that cataract surgery to improve eyesight can reduce cognitive decline by 50%.

While age related hearing loss is a permanent condition it can be treated with hearing aids. Hearing aids amplify the sounds you are missing, making it much easier to converse with the people in your life. People who use hearing aids can connect to the people they love, hear better over the phone, stay more active and have a greater sense of independence.

Researchers have found that using hearing aids can actually reduce the risk of cognitive decline by 70%. When you consider what is at stake, why would you put off dealing with your hearing loss another day?

Don’t risk losing your connections with the people in your life, your sense of independence and your memories that make up your lifetime. Make an appointment for a hearing exam today!