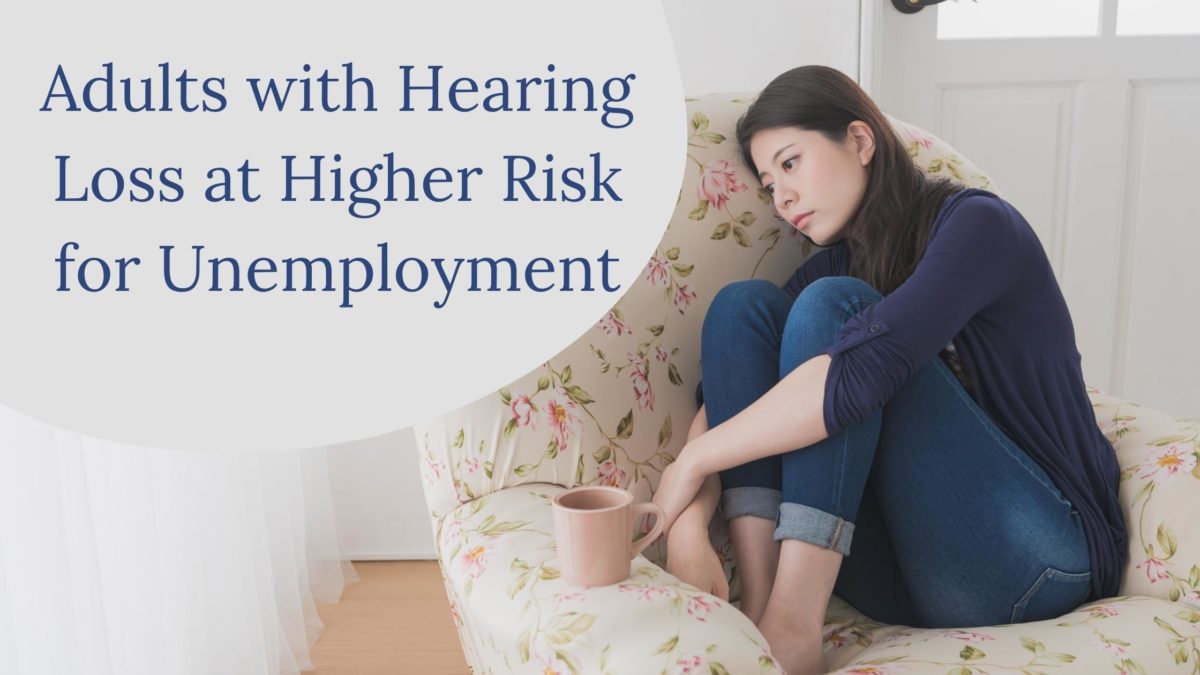 It’s estimated that hearing loss affects one in eight people in the United States (13 percent, or 30 million) aged 12 years or older in both ears, and its effects are often greatly underestimated. What starts as an ear issue, if unaddressed can impede daily conversation, put a strain on the most solid relationships in your life, cause chronic depression, anxiety, cognitive decline, and increase the risk of accidents leading to hospitalization. Despite the severity of symptoms, people have often put off treatment from the time they suspect hearing loss on average for 7 to 10 years. Often this is due to fears of admitting age or fear of expense. It’s important to understand that avoiding investment in hearing has the potential to have a significant impact on your ability to get and keep steady employment.

The Hearing Health Foundation reports that people with severe hearing loss have an unemployment rate (15.6%) – twice that of the average hearing population (7.8%) and almost double that of their peers (8.3%) who treat hearing loss with hearing aids. This illuminates the serious impact an unaddressed hearing loss can have on the general population’s ability to become employed.  With further inspection, it was discovered that hearing loss has consequences not just for job opportunities but earning potential. A 2012 paper published in the journal Annals of Otology, Rhinology & Laryngology examined the link between hearing loss and lower annual earnings. In conclusion, the study confirmed that people with untreated hearing loss had lower average incomes than those with treated or normal hearing.

Understanding the Connection between Hearing Loss and Higher Rates of Unemployment

With hearing loss’s impact on communication, it is no surprise that it can interfere with people’s chances of obtaining employment in a highly competitive environment. Breaks in hearing can make it difficult to hear and respond to employers’ questions. Instead of devoting focus towards answering questions presently, during interviews, energy is devoted to filling in the blanks in words and sentences.

The Better Hearing Institute BHI reported that on average people with hearing loss made $30,000 less annually than contemporaries with normal hearing. It was more likely hearing-impaired individuals to be passed over for promotions and raises.

This can be attributed to social issues which often accompany hearing loss. Many may struggle to follow lunch break conversations with coworkers or keep up to date with workplace happenings and retain the content of meetings. This can affect work performance as they can be unable to follow instructions and are more likely to make mistakes. All too often employees with unaddressed hearing loss are likely to lose their job due to communication issues.

Tips for those already in a job

While hearing loss affects people’s performance at work and earnings it’s important to remember that hearing loss is a recognized disability under the Americans with Disabilities Act (ADA). This protects workers from disability-based discrimination. Being open about your hearing loss in the workplace can not only protect you from loss of employment but entitles you to reasonable accommodations. These accommodations also allow you to ask to sit closer to the speaker or to receive assignments and instructions in an email form. Being open about your hearing loss will protect and empower you to do the job to your greatest potential.

While most hearing loss is irreversible it can be treated effectively with hearing aids. Hearing aids amplify the specific sounds you struggle with based on a hearing test. This can allow you to actively participate in conversations at work, with co-workers, and with employers. They make it easier to be present when working and when relaxing around the water cooler or at lunch breaks. The personal relationships hearing aids allow you to maintain closeness, comradery, and a feeling of family in traditional workplace structures which help to combat depression and anxiety. The important thing is that you diagnose your hearing as early as possible which is more difficult than you may expect. Many people go through years with undiagnosed hearing loss and don’t even know they have it. Even so, this doesn’t mean the negative impact of hearing loss is not already in process. Schedule an annual hearing exam and get in front of a hearing impairment today.